In between house projects (the outside trim on the porch windows is complete – yay!), weeding, basic household stuff like laundry, and going to work, I have actually gotten some good stitching time in over the last week or so.

The semi-rotation has been working well so far, but I’m now about to put it to a real test (more on that later). 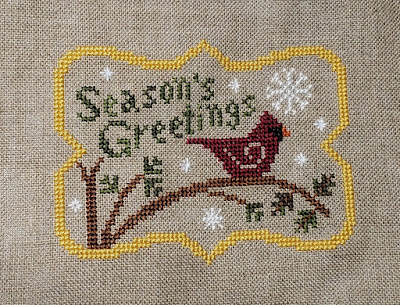 Mary Goodwin has become my weekday evening piece … when I have enough energy or brain left to stitch on what I still think of as school nights.  A few more letters have been added since this picture. 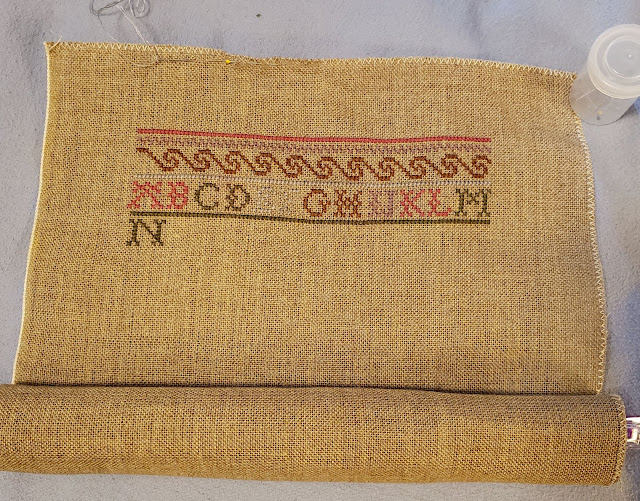 I’ve worked on Goat Load and on With My Needle’s Acorn Sampler Bag, but both these projects have had … issues.

I had picked out two pieces of 32 count linen as possibilities for Goat Load, but rejected first one and then the other after doing a handful of stitches on each – that bitty goat at the top simply was not going to show up when viewed from farther away than one's nose.  So I dove into my linen bin but found no small pieces of 32 in a good color.  Held my breath and cut (eeek! cutting into Larger Linen!!) a 4-inch strip from a nice long, 9 inch wide piece, and started stitching.

And wondered why my stitches looked so bad.

Said a few choice words and checked stitches against my ruler and then said a few more not very nice words – the 32 count was not.  It looks like it's 35 (explaining the problem with how my stitches looked), though a quick check with my little ruler is all I've done.  Hauled out the linen bin once again, this time opting for a darker, unbleached linen in 27-count.  The little guy is showing up better on the darker fabric, and my stitches look much more like nice little Xs now. 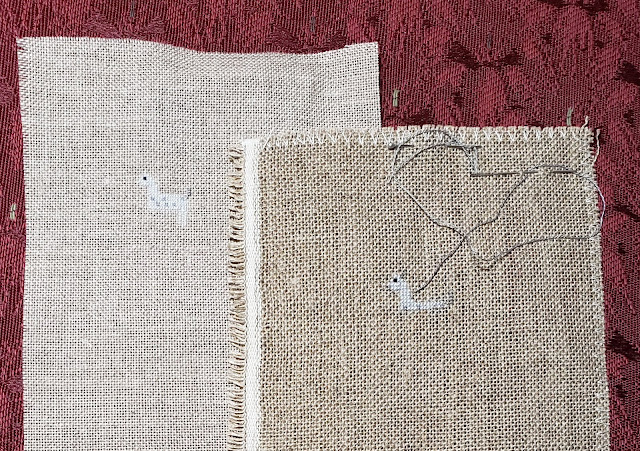 And then there’s the Acorn Sampler Sewing Case/bag.  When this pattern first came out, I was very excited about it and ordered the fancy, called-for linen – Lakeside Linen Autumn Gold in 32-count – something my LNS did not carry.

I was completely dismayed when the linen arrived in my mailbox – it was orangey-tan.  A quite dark orangey-tan.  Looking at the photo with the chart again, I figured what I received was a dyelot oddity and ordered another piece from a different shop.

With the same result.

At this point I decided that the particular piece of fabric Ellen used must have been from a much lighter dyelot so the first chance I got, I was off to my LNS.  (Oh, to still have that LNS only 20 minutes away!!  What bliss to have been able to see and feel stitching fabric before I bought it!)   Seriously, does this fabric look dark orangey-tan to you?? 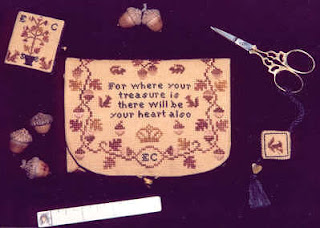 Using the photo from the chart as a guide, the shop owner and I picked out two or three possibles, did a floss toss, and I came home with fabric that looks like a very light natural with a barely golden tinge – perfect!!

Since Ellen suggests using a varied collection of specialty stitches for the acorn caps, it seemed best to stitch only the vine to start.  Said vine has a rather long repeat and my eyes didn’t track it nearly as well as it seemed - the right side had an error discovered only after I was at the bottom.  Frog, frog….

Not sure if it’s the linen I'm using (which seems very tightly woven) or just that it’s on 32, but this is giving me the same feeling as 35/36 count sometimes does – two strands of floss feels like too much but one strand isn’t enough.  Geez, how many times do I need to change fabrics on this project???

I’m stalled at this point and thinking 28-count in a light natural would be better.  On 32, the finished width should be 5 1/2 inches while on 28 count it would be 6 … and I won’t ever complain about a stitching bag being a touch larger!!

Thoughts?  Opinions??  Please let me know your ideas on this one!

Now to the test of my semi-rotation.  With the long weekend coming after a Friday spent running around like a headless chicken (short version:  one of my two bosses left at the end of November and we had a candidate in for interviews – guess who coordinated and had to make all the on-the-fly changes?), it seemed the perfect time to start Betsy Davis.  Great reward, right?

Betsy’s been in my stash for a long time, and while I originally bought her with DMC, a year or two ago I decided I wanted to stitch her in silks, and Marsha was happy to sell me the right colors and quantities. 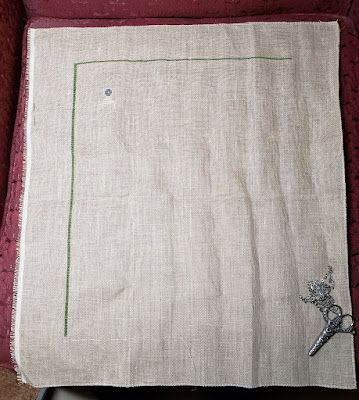 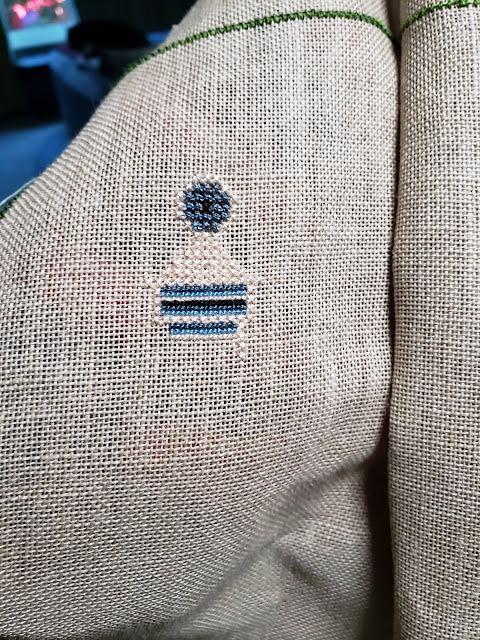 Why is Betsy a test?  After waiting so long to start her (and I think I’ve wanted to stitch her since I first saw her years and years and years ago), it will be hard to work on anything else!

Thanks for letting me ramble on!

deb
Stitching, quilting, reading, working on the house and the yard with my husband, enjoying our cats - these are my favorite things. Husband and I are empty nesters recently moved to north western Pennsylvania where we're enjoying life with our two cats. Needlework is my passion - if it's yours as well, please take a moment or two to say hello.